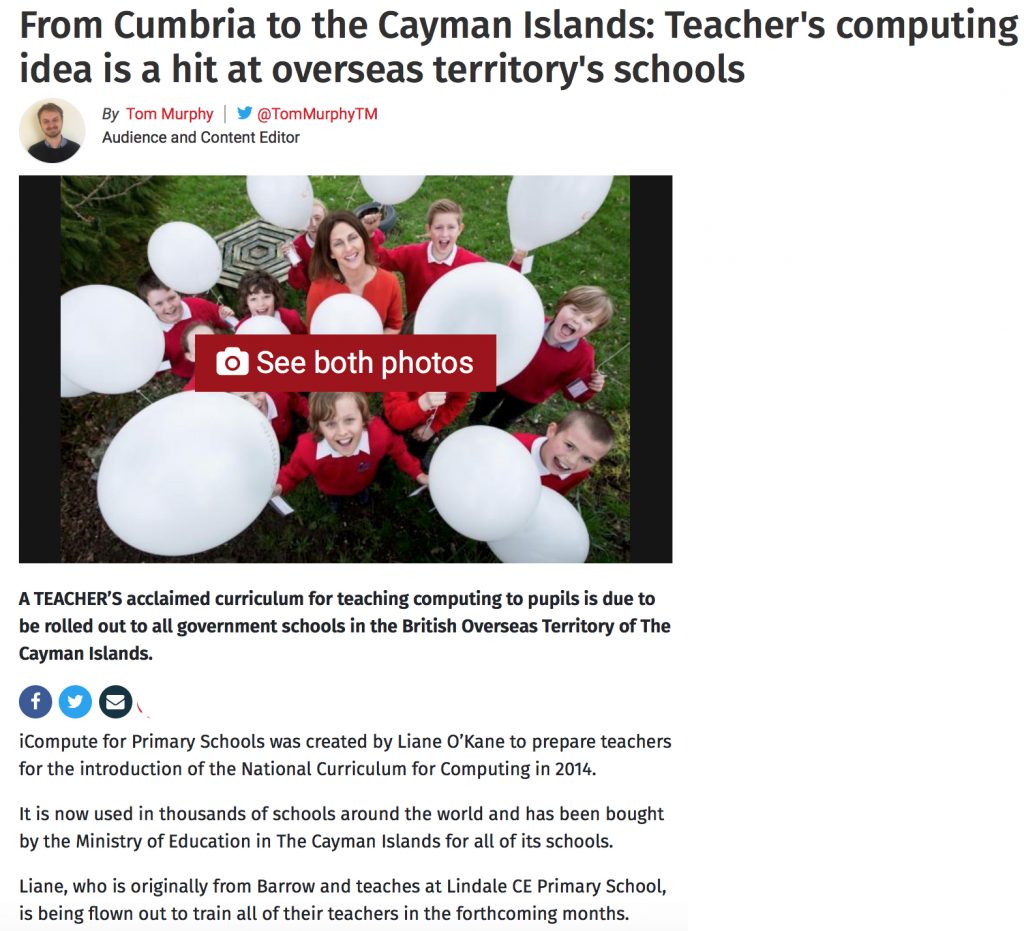 From Cumbria to the Cayman Islands

A TEACHER’S acclaimed curriculum for teaching computing to pupils is due to be rolled out to all government schools in the British Overseas Territory of The Cayman Islands.

iCompute for Primary Schools was created by Liane O’Kane to prepare teachers for the introduction of the National Curriculum for Computing in 2014.

It is now used in thousands of schools around the world and has been bought by the Ministry of Education in The Cayman Islands for all of its schools.

Liane, who is originally from Barrow and teaches at Lindale CE Primary School, is being flown out to train all of their teachers in the forthcoming months.

“Being asked to supply schools and train teachers in the Cayman Islands is an exciting opportunity for iCompute to help others prepare pupils for the modern digital world – learning about and with technology,” she said.

“It always surprises me the reach that we have and where our lesson plans and resources are being used. We have a number of Overseas Territories and Commonwealth countries using iCompute in their schools and plan to offer them a visit whist I’m in the area this year. I can’t wait to show teachers in the Caribbean how rewarding and creative teaching computing can be and how enthusiastically their pupils will respond.”

It has been nominated for several prestigious educational technology awards each year since 2014, features on BBC Bitesize for Primary Computing and is used in thousands of schools around the world.

Computer Scientist Liane is one of a few primary computer science master teachers appointed and funded by the Department of Education (DfE) in England 2014 to prepare teachers for the introduction of the National Curriculum for Computing.

Her work has been instrumental in the success of the National Curriculum’s implementation in over 26,000 primary schools.

Liane is a Computer Scientist (BSc (Hons)), Software Engineer & author of iCompute which supports schools with a computing curriculum and resources for teaching computing in the EYFS, Key Stage 1 and Key Stage 2. ERA Awards Finalist 2016-2021, BETT Awards 2014-2018. Featured on BBC Bitesize for Primary Computing and The Hour of Code (code.org)
View all posts by Liane O'Kane →
Bookmark the permalink.